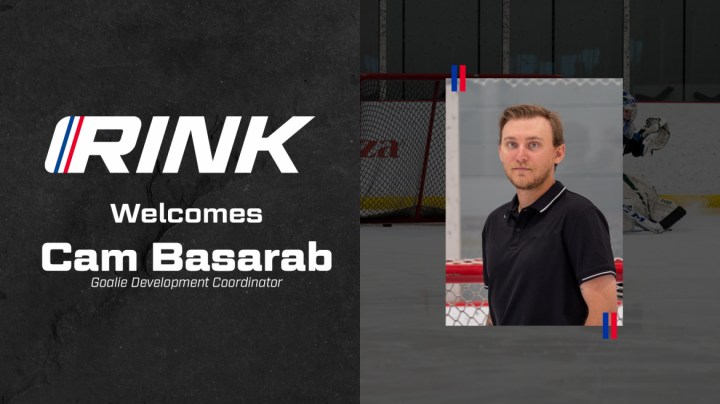 RINK and RHA Kelowna continues its expansion in the Okanagan with the hiring of Goalie Development Coordinator, Cam Basarab. Cam comes to us having worked throughout Junior and Minor Hockey in multiple roles as a goalie coach, a video coach, an assistant coach, and as a head coach. Cam’s role will serve dual purposes for goalie development within our organization. Cam will help grow our goalie development programs and offerings similar to the RINK Training Centre in Winnipeg as well as lead the development of all goaltenders in the RHA Kelowna program.

His experience working with all player positions and video will be an incredible asset in teaching our goalies more about the game and their individual style and role. His work recently in Trail was outstanding. Cam was an excellent mentor and coach to the goalies within the Smoke Eaters organization and was instrumental in building confident, skilled, and mentally tough young men. His work ethic is second to none and he received high praise and recommendation from former Trail head coach and now 2x Stanley Cup winner, Jeff Tambellini.

“I hope to bring my genuine passion for the game and developing quality goaltenders and people to the program,” said Cam. “I really believe that players can and do feed off the energy that their coaches put out so that's a big reason why I'm looking forward to coming into this job. I will be looking to build on the excitement I have coming in and create a positive impact on the players and rest of the staff.”

RINK Kelowna Executive Director, Maco Balkovec had the following to say about Cam’s hiring. “We are excited to have Cam lead this new role and help continue build a strong program in Kelowna and the province.”

A bit more about Cam and his coaching past as he comes to the RINK after working as the goaltending coach for the Trail Smoke Eaters of the BCHL. He also held the position of Head Coach with the Kootenay Ice Major Midget team for the 2019/20 season. Prior to that he was the Head Coach and Director of Hockey Operations for the Campbell River Storm in the VIJHL where he also assisted the North Island Silvertips Major Midget team in his spare time. Additionally, during his time on Vancouver Island, he worked with goalies of all levels at multiple camps and academies. Prior to coming to BC, he spent 7 years working in goaltending development in Southern Alberta with groups such as Hockey Alberta, Pro Goal Development and more. Cam also bring along the experience of working with two WHL teams in the past; the Lethbridge Hurricanes as a Video Coach and more recently the Vancouver Giants working the analytics and video.

“With the RINK, I will be working to create a program where all of our goaltenders can progress their on-ice technical skills while also developing into better teammates, students, and members of society,” said Cam when asked about how he wants to impact goalies in the RHA Kelowna program. “I think when done right, hockey can be such a useful tool for creating some of the most impactful and hardworking people in the world so that makes this opportunity very exciting. Combined with the fact that we will get to be doing this while working on technical goaltending skills is an amazing situation.”