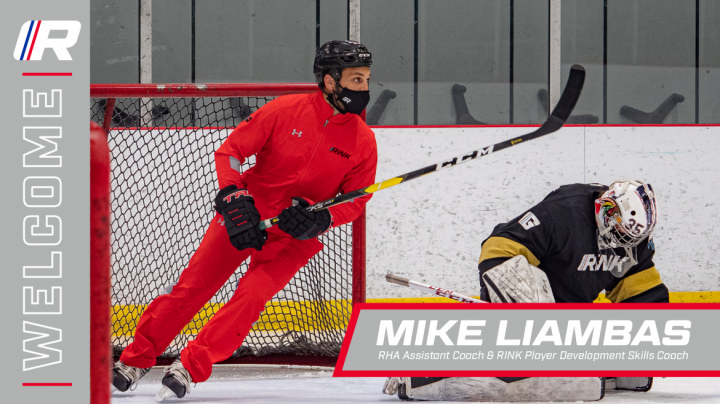 RINK Hockey Academy Winnipeg would like to welcome Mike Liambas, as assistant coach of the RHA U-18 Prep Team. Along with, the RINK Player Development team is excited to have Mike play a dual role as a Skills Development Coach, second to his coaching role.

Mike will be coaching alongside head coach, Rob Smith, “Mike is a huge addition to our program as soon as you meet the guy you want to spend more time with him. He is fresh from a great playing career. His experience, energy and personality will add a lot of value to our student athletes’ lives.” says RHA Winnipeg U-18 Prep Head Coach.

“I’m super excited to be joining the U-18 squad and learning the ropes of coaching from Smitty” states Liambas, who is eager to get the season started along with his coaching career.

Mike has an extensive player background being a former Canadian professional forward, recently playing with the Iowa Wild of the AHL, while under a two-way contract with the Minnesota Wild of the NHL. Mike made his NHL debut during the 2016-17 season with the Nashville Predators before being picked up by the Anaheim Ducks.

Currently Mike is working with our Player Development staff in the summer months with our R1 Athletes “Working everyday with the development crew and the Athletes in the R1 program is something special. You can see development in the Players week by week. It’s exciting to see.” says Liambas. Alongside his coaching duties during the season, Mike will continue to work with our skill development team through all our offerings.

About the RINK Hockey Corp:

The RINK Hockey Corp. is a Winnipeg, Manitoba, Canada based company founded in 2009 by Brad Rice, Tina Jones, and Mike Keane. The idea was to bring a unique approach to skill development and the game of hockey. Our team of professionals are committed to setting the standard of excellence and innovation in hockey in an environment where exceptional performance has no limit with the vision of being a complete hockey resource for personal and professional development. The company owns and operates the RINK Training Centre in Winnipeg, MB and its respective Player and Goalie Development divisions, as well as the RINK Testify Performance whose focus is sports-science and data-driven training.  The RINK Hockey Corp. also owns and operates the RINK Hockey Academy, with locations in both Winnipeg, MB and Kelowna, BC, which delivers student athletes a world-class education-based hockey experience. The RINK Hockey Corp. prides itself on delivering development to all ages and skill levels while upholding a culture that fosters love for the game of hockey.