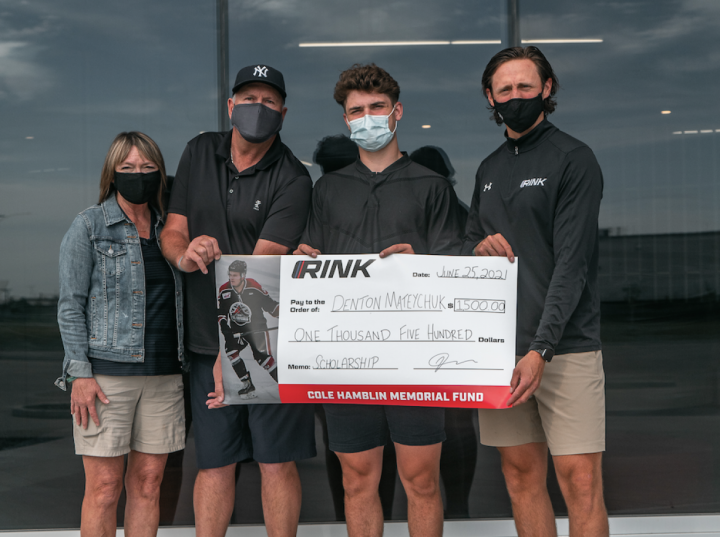 Earlier in March, RINK announced that we would be assuming the responsibility of awarding the Cole Hamblin Memorial Fund annually to a RINK Athlete. We are happy to announce that this years recipient is, Denton Mateychuk of the Moose Jaw Warriors.

Denton was a former Eastman Select playing his 4 years of minor AAA hockey and making the jump straight to the WHL with the Moose Jaw Warriors. The top 4 defensemen at just 16 years old, has made a big impact to the team. Denton is known to always be up in the play and creating opportunities. Denton is a top prospect for the 2022 NHL Draft.

“Cole Hamblin worked hard at the RINK and enjoyed his sessions there. I am the same. The sessions I’ve attended are amazing and beneficial. I would love to have the opportunity to put this scholarship to good use by working hard and improving, all in Cole’s name.” Says Mateychuk. Denton spends his summers training at the RINK in our R1 Summer Junior Program, "Denton is not only a talented player,  but it’s his work ethic and attention to the details of his individual game that allows him to continue to excel.  His character and receptiveness made him a natural fit for the first annual Cole Hamblin Scholarship." says Director of Development & On-Ice Programming, Jon Cara.

Congratulations Denton on being awarded our First Annual Cole Hamblin Memorial Fund Scholarship, keep your eyes peeled for instructions on how to register for next year!

On November 5th of 2014 the RINK family lost one of their own, Cole Hamblin. Cole was lost to an aggressive cancer battle. Cole's legacy will never be forgotten at the RINK, as his love for hockey is bestowed in everyone that walks through the door. RINK was pleased to be able to present the Cole Hamblin Memorial Fund, a $1500 scholarship awarded annually to a RINK Athlete.

RINK is proud to give a RINK Athlete this award to continue remembering Cole’s legacy. This scholarship is eligible to be used towards R1 Off-Season Training in the summer months. This award will be given to a RINK Athlete between the ages of 14-18 who demonstrates sportsmanship and leadership qualities, as well as participates respectfully and enthusiastically both on and off the ice. The recipient of this award will be chosen by a panel of RINK Professionals including both on-ice and off-ice staff.