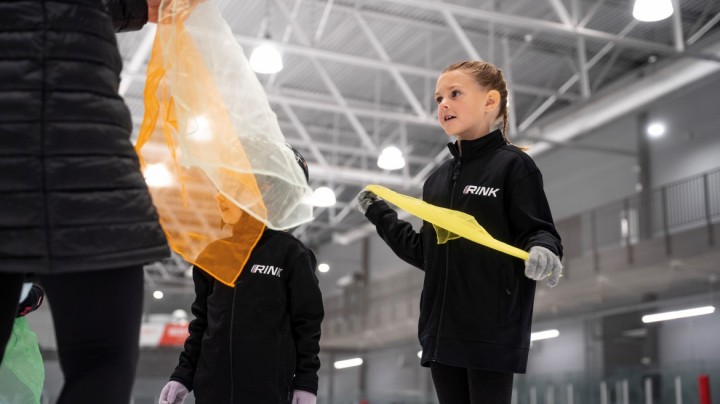 RINK is excited to announce the launch of the RINK Figure Skating Academy. The inaugural season will kick of September 2022 and follow Skate Canada development guidelines. Figure Skating is an incredibly charming and enchanting sport no matter if you have been doing it your entire life or are new to the sport. Skaters are constantly pushed outside their comfort zones to levels they never would have thought possible. RINK Figure Skating Academy plans to bring together all the elements of an excellent program under one roof, something that is uncommon within the sport and unseen within Manitoba.

The idea for a figure skating academy came from the success RINK has had on the hockey academy side operating two locations with 10 teams that play out of the Canadian Sports School Hockey League (CSSHL). The level of development and improvement seen out of such a focused model was unprecedented. From here an opportunity was identified that the same model and integration could provide tremendous value to the figure skating community and skaters alike. Commonly skaters, to train an adequate amount, will have sessions at a variety of different rinks across the city at exceedingly early or late hours. These same skaters then do their off-ice training at a different location as well as their dance portion at yet another different location. RINK Figure Skating Academy will be able to offer this all in one place during prime hours with no travel. It will not only improve all elements of a figure skater's development journey but drastically lower the time commitment on parents for travel and schedule accommodation.

The Junior Development program is structured very similar to how the RINK Hockey Academy operates. The program is built with 3 on-ice and 2 off-ice sessions weekly with specific goals and directives in each session. All on-ice sessions are taught through group instruction with opportunities for 1 on 1 coaching with individual skaters during sessions. On-ice session will consist of free skate, dance, skills, creative movement, and synchronized skating training. Off-ice sessions will be delivered by the performance coaches at RINK Testify Performance with a focus on jump training, flexibility, and dance.

Leading the charge for RINK Figure Skating Academy is Brooklyn Parker. Brooklyn is a certified provincial coach and is currently working towards obtaining her national coaching certification. She graduated from the University of Manitoba with a Bachelor of Kinesiology and is a NSCA Certified Strength & Conditioning Specialist in 2019. Brooklyn was a member of Manitoba’s High-Performance Figure Skating Team for seven years, starting in Juvenile and ending in the Junior level. She earned numerous provincial medals during this time and five of the seven years she was a member of the team, she competed at the Skate Canada Challenge event with the top skaters in Canada. In 2011 she represented Manitoba at the Canada Winter Games in Halifax. Brooklyn was also a member of the Pembina Pizazz synchronized skating team for 9 years and had two opportunities to represent Manitoba at the Canadian Synchronized Skating Championships. RINK is excited to have Brooklyn lead this transition with her wealth of experience and knowledge.

RINK will be hosting an open house June 28th, 2022, from 6:00PM to 7:45PM where anyone interested in the program can get a glimpse of what you can come to expect within the academy. The night will have both on and off-ice components to watch and attendees will also have the chance to meet and ask questions of the key staff involved for the upcoming program.

If you are interested in the program this winter, please reach out to our program lead Brooklyn Parker at brooklyn@therink.ca.

Want to get a taste of our Intro to Figure Skating/Junior Development Program? RINK is offering a 4-week summer skating program in the month of July. The skater requirements are as follows; Intro - Must have passed CanSkate Stage 2 & Working on CanSkate Stage 3-6, Development - StarSkate, Star 1-2, Skaters that have not completed Stage 5 of CanSkate must wear a CSA approved hockey helmet. Skaters must be registered with Skate Canada in order to participate in the program.