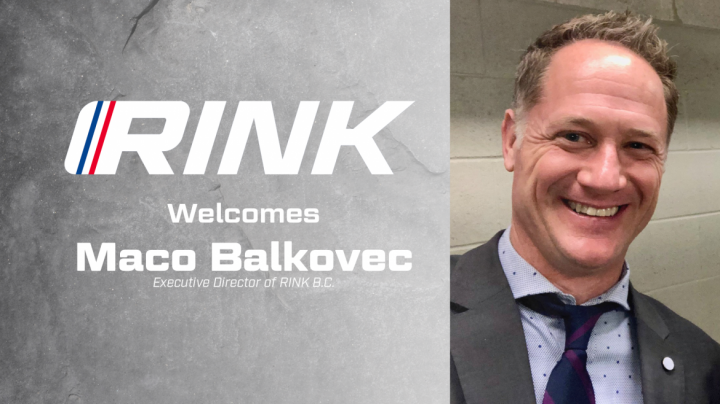 The RINK Hockey Corp. is excited to welcome Maco Balkovec to the team as the Executive Director of RINK BC. Maco will begin his role with RINK Kelowna April 5th, which coincides with the start of our inaugural spring development programs. These programs will be the first of its kind since the acquisition of Pursuit of Excellence. Maco will be operating out of the newly completed RINK Kelowna offices at 716 Adams Ct. He will be working with newly appointed Regional Manager of Player Development, Glenn Carnegie on the development side of the business and Manager of Operations for RINK Hockey Academy Kelowna, Glen Naka on the teams’ side of the business. Maco’s main role going forward will be to focus on growing and establishing the RINK and RHA brands and businesses throughout the province of British Colombia.

"I have always been so impressed with the RINK program. From their coaches, to their players, to the way their teams play and compete, to the people that run their organization. Character matters. Values count. These are things that align with what we believe and who we are. We could not be more excited to be a part of their new Kelowna program,” said Maco on joining the RINK and what it means to him.

Maco’s past experience includes time with Bowling Green State University, Burnaby Winter Club, and The Canadian Sports School Hockey League amongst others. Maco comes from a teaching background that has been intertwined with coaching ever since he began his first teaching position nearly 20 years ago. Through this experience he has developed a passion and ability to connect and inspire students, players, and peers. In his time with Burnaby Winter Club, Maco developed and implemented a plan for long term athlete development as well as establishing key contacts within the WHL, NCAA, BCHL, BC Hockey, and the CSSHL. During his time as Vice Chair of the CSSHL, Maco helped establish new policies and guidelines for league operations, assisted in the creation of the Education committee to standardize expectations in the classroom, as well as aided in the quest for expansion within the league that grew from 13 to 18 programs during his tenure.

The RINK will look to draw from Maco’s experience with managing teams and various hockey relationships to further grow and develop the company from both the on & off ice development and teams’ aspects of the business. “We are incredibly excited to bring Maco on board with the RINK B.C. operation,” said RINK President, Ryan Cyr. “We are adding a tremendous leader whose characters and values directly align with those of the RINK. With his experience in hockey, education, and business he will be a positive role model within our entire organization and a driving force in establishing our company within the region.”

When asked about what he wishes to achieve, Maco had the following to say. “We want to be the best at what we do, and we want to be a big part of the City of Kelowna, the Okanagan region, and the province of BC. This is a tremendous opportunity to work with some great people and do great things. There is nothing better than helping young people work towards achieving their goals. We want to help them become better people, better students, and better hockey players. I cannot wait to get started!"

ABOUT THE RINK HOCKEY CORP.
The RINK Hockey Corp. is a Winnipeg, Manitoba, Canada based company founded in 2009 by Brad Rice, Tina Jones, and Mike Keane. The idea was to bring a unique approach to skill development and the game of hockey. Our team of professionals are committed to setting the standard of excellence and innovation in hockey in an environment where exceptional performance has no limit with the vision of being a complete hockey resource for personal and professional development. The company owns and operates the RINK Training Centre in Winnipeg, MB and its respective Player and Goalie Development divisions, as well as the RINK Testify Performance whose focus is sports-science and data-driven training.  The RINK Hockey Corp. also owns and operates the RINK Hockey Academy, with locations in both Winnipeg, MB and Kelowna, BC, which delivers student athletes a world-class education-based hockey experience. The RINK Hockey Corp. prides itself on delivering development to all ages and skill levels while upholding a culture that fosters love for the game of hockey.