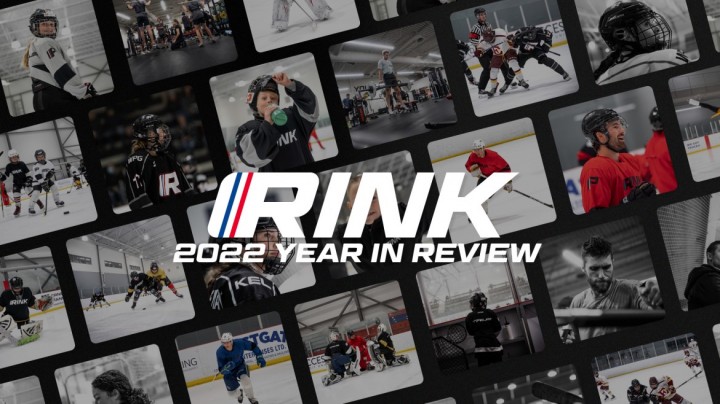 A Look Back while Pushing Forward!

2022 was a year full of challenges and triumphs. From dealing with the ongoing pandemic, it was a year that tested us all. But through it all, we found strength in our communities, resilience in the face of adversity, and hope for a better future. Here's to looking back at our many divisions wins, innovations and collaborations to bring forward our companies mission.

Scroll down and enjoy our Year in Review!

Over the past 2 years, the RHA Kelowna program has evolved and grown into a force to be reckoned with. RHA Kelowna strives to deliver the BEST Sport School experience to every student-athlete that comes through the doors.

“If you’re a hockey player, this is where you want to be.” RHA Winnipeg represents and exclusive franchise within the CSSHL. Over the past 6 years we have offered an integrated approach to individual development in an exceptional environment that breads success.

RINK Hockey Winnipeg has come a long way since it's inception in 2016. From the expansion of our coaches, strength trainers and moving of facilities to RINK Training Centre, it was time for a revisit to showcase why RHA Winnipeg is a leading organization in the CSSHL.

CSSHL Playoffs are the culmination of 6 months of training, practices, travel and game play for all 10 of our teams across Winnipeg & Kelowna.

Say Hello to the perfect Summer Camp apparel package! These boxes were the response to over 1600 kids flooding our building and were available in the multiple youth sizes, Youth Small, Youth Medium, Youth Large & Adult Small.

2022 was RINK's biggest Summer yet! We had our busiest summer ever and provided skill development over 9 weeks across 4 locations! RINK Training Centre, Seven Oaks Arena, EDGE at Gateway and KELOWNA! Sincerely from everyone at RINK, Thank you.

Figure Skating is an incredibly charming and enchanting sport no matter if you have been doing it your entire life or are new to the sport. Skaters are constantly pushed outside their comfort zones to levels they never would have thought possible. RINK Figure Skating Academy plans to bring together all the elements of an excellent program under one roof, something that is uncommon within the sport and unseen within Manitoba.

They say talent sets the floor and hard work sets the ceiling, for Manitoban, Owen Pickering, the ceiling is limitless heading into tonight’s NHL Entry Draft.
After a breakout U16 season with the RINK Hockey Academy, his cerebral sense for the game and unmatched Hockey IQ is what his trainers, family and NHL scouts tout as his defining factors that have raised him into a high pick in tonights NHL Entry Draft.

The RINK team followed Owen weeks prior to the 2022 NHL Entry Draft. Talking to his parents, Tom and Dana, former RHA U16 Coach, Sandy Henry and Strength Coach, Matthew Asmundson to tell his story before the big night.

The 2022-23 RHA season is set to be one of our biggest yet! The integration of on-ice, off-ice and academics is what sets RINK apart from any other Student-Athlete experience. Follow us to keep up to date with our most exciting season to date with RHA.

RINK is excited to announce that we have been recognized for our skating development programs and are now sanctioned with Skate Canada, making RINK Programs Skate Canada certified. This will primarily affect and strengthen our already strong and popular introductory programs such as Learn to Skate, Intro to Hockey, and Hockey Development.

Our Introductory programs have welcomed thousands of young athletes into the world of skating through our Learn to Skate, Intro to Hockey, Hockey Development and new Intro to Figure Skating programs. RINK is thrilled to be recognized by Skate Canada expanding our knowledge and recognition as a company.

Director of Sports Science & Performance, Dr. Jeff Leiter, receives $119,370.00 in research funding for an Innovation Proof-of-Concept Grant in the area of Biosciences for Research Manitoba.

This project will study muscle activity and lower limb movements during an on-ice sprint to develop a Skating App that will reduce groin injury and enhance skating speed.

None of these accomplishments would have been achievable without our staff. The RINK staff continues to push the boundaries of on and off-ice development while constantly expanding into new territory.

The lifeblood of this company will always be our clients. Without you, our coaches and trainers would not be able to deliver the development you have come to know and love.

So here's to another year of countless reps on the ice, in the gym and in our academy. From everyone here at RINK, thank you.